What other profession has within its job description such a huge element of rejection? Even actors, famous in the rejection stakes, don’t have to actually write the plays they audition to perform in. Most people go to work to do a job. But what if the job is literally defined by what is in your own head? Illustrators are generally commissioned—they may produce pieces on spec, or personal work as a shopfront, but it’s a whole different ball game for the cartoonist. They must ‘churn’ ideas, work them up and send them out to a world where they will be placed in piles, summarily judged, occasionally accepted, mostly rejected and returned to sender.

So do some of the best jokes get away? Here’s one of my favourite cartoons from the last year, by Will Dawbarn, a fresh and talented cartoonist. He can really draw, and is funny. The second should be a given with a cartoonist, the first isn’t. If you’re funny and can’t draw, you’re a cartoonist. If you can draw but you’re not funny, you’re not. 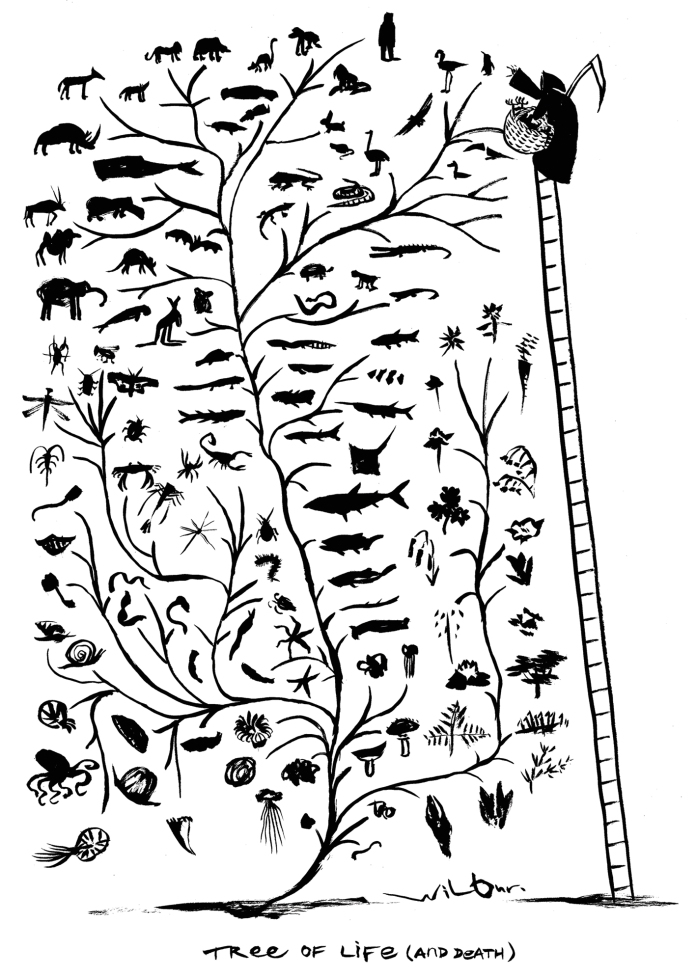 It was taken from a batch sent in over a year ago but never run. Why? Because editors have the final say, and because a sense of humour is a hard thing to predict or pin down. I bought this before our current editor was here (she wouldn’t have picked it), it’s black and white (all our single gag cartoons run in colour and colouring this would only detract from its precise beauty) and, necessarily, it needs to run quite large for the quality of the drawing to work (we’re really pushed for space!).

Most cartoonists I know have a day job. There’s just no way (especially since Punch hit the buffers) that most working cartoonists can make a living by drawing alone. Will is an exception. He draws a couple of great strips in The Dandy, and contributes regularly to Private Eye amongst others.

BRIEF  There’s no brief, just the knowledge that a handful of magazines publish humourous cartoons sent in by freelancers. They can be on any subject, and can be drawn in any style. Mostly you get them sent back, with rejection slips of varying degrees of politeness. It’s an oversupplied marketplace.

IDEA  Death is a much loved figure of cartoonists. I’ve used him on many previous occasions—he’s often good for a laugh. The idea occurred to me when I was looking at a Tree of Life poster on my child’s wall.

MATERIALS  Brush and Indian Ink on A3 paper.

RESEARCH  Visually, all I needed was the poster. I drastically simplified it in the process. I must have been listening to or reading something about the mass extinction we’re currently presiding over, but with this type of work the ‘research’ is a retrospective tag. That hour you spent looking at the paper whilst snoozing in front of the fire might later turn out to have been a vital research period.

PROCESS  Sometimes a drawing might take a good few goes to get right, even a very simple one. With this image, it all worked out first time, despite its relative complexity. I normally use the computer to add a little shade, but this was a rare cartoon that didn’t need anything adding or tweaking on the computer.

RESISTANCES  When I first had the idea, I thought yeah, but hang on, I’m not drawing a complete Tree of Life. All very well for a definite commission you know you’re being paid for, but way too big a job for the speculative magazine cartoon market! Sometimes I do put in a lot of work on the drawing of these things, but it’s always a gamble because most cartoons drawn for this market will, inevitably, be rejected. The answer is probably to submit roughs instead of finishes, but I’m not sure how that would go down with some editors.

INSIGHT  I had the idea of using a brush (my usual drawing implement is a dip pen) to do a simple representation of each species, and realised it could actually be done quite quickly. I skipped the pencilling stage and just drew with the brush. Ultimately, I’d like to do every cartoon this way, so it has the spontaneity of the first line.

DISTRACTIONS The thing about this type of cartooning is that distractions are all grist to the ideas mill. Bring ’em on!

NUMBERS  I started counting the number of species I drew in this cartoon several times to answer this question, but each time I quickly got lost because they’re not organised in rows or columns. Sorry.