From a short talk, given at Making Magazines, St Brides, summer 2012

“I’m wearing the preppiest clothes I could find in my wardrobe, to sort of get in the mood… I’m guessing Simon didn’t do the same with Twen…*

My fascination with American culture began in the sixties and seventies and was driven by music and film, but in the eighties it was driven by magazines: magazine writing, magazine design, magazine photography and magazine illustration. And the magazine I loved above all others was Esquire. I was aware of it because I’d arrived at Radio Times, hired by David Driver, in the period following Robert Priest and Derek Ungless, who had gone to Canada to do Weekend magazine, a newspaper supplement.

At RT, with David, they had pushed the technology of the day to do infographics with Nigel Holmes and Peter Brookes, hired the best photographers working, and continued the magazines’ amazing history of illustration, mixing the old stable, such as Robin Jacques, with the raw talent then emerging in London, like Sue Coe and Robert Mason.

In the early seventies Esquire’s covers were still strong and clean, but inside it was like an academic journal… the occasional great spread didn’t disguise the fact that every feature was laid out in exactly the same template, and by the late seventies the magazine had lost its way. It was a pale shadow of the great George Lois eras. It changed owners, had gone fortnightly and the once-great covers were replaced by a mish-mash of styles and imagery.

Our eyes looked West to see what they were up to over there. Roger Black: “Remember that in the seventies few newspapers and many magazines still did not have art directors. I would say that (in the eighties) Walter Barnard shaped Time as much as the Editor. The same with Robert Priest at Esquire.” New York at that time also boasted Mary Shananhan at GQ, and Derek Ungless at Rolling Stone.

Eighties Esquire was confident: it had such a sure sense of its history and its place in American Letters. It celebrated its heritage, and wasn’t scared it would feel old-fashioned as a result. It never lost Esky, the embodiment of Esquire man, at this point drawn by Arnold Roth. As John Updike wrote, “All cartoonists are geniuses, but Arnold Roth is especially so.” The logo was sensitively adapted and modernised. It still had an amazing stable of writers and it developed a sense of the big story—every so often it would do a huge overarching theme issue, running to hundreds of pages. It had attitude and a really strong editorial voice, that particularly American mix of high seriousness and quirky playfulness. Only the New Yorker seemed comparable in its ability to embody the past whilst not compromising the present.

The key design element was layering. Priest and April Silver, who worked with him (and succeeded him) pushed more and more information and structure onto each page. None of the editorial designer’s toolbox was left unused. I loved the way that Esquire used Century Oldstyle and Franklin Gothic. In every weight, in every style. There are amazing levels of information and organization in each spread. As Fred Woodward said: “In the early 80s, Robert Priest’s work for Esquire, around ’81, ’82 was very influential. It owed a certain debt to Rolling Stone but took it somewhere else. The magazine published very personal photography and illustration, a lot of it from Europe, that was unusual and ended up being influential.”

About five years ago I noticed that my colleague at American Reader’s Digest, Hannu Laakso, seemed to be making it his mission to track down and use what may be politely referred to as “veteran” illustrators. He’d commissioned Ronald Searle a few times, and had started using the great Ed Sorel on a regular basis. I called him and asked him if he was going to use Arnold Roth—if indeed Arnold Roth was still working. “Yes. Of course,” he said in a tone that made me  feel I’d asked a stupid question. So I called Arnold. Nearly 80, with a treasurable phone and email manner, he said he’d get to my job as soon as he’d done Fortune’s End Of Year Cover. “I’ve just gotta go and draw bankers jumping offa tall buildings.” He said this with undisguised glee.

I got my Arnold Roth. Even better was the letter accompanying it.” 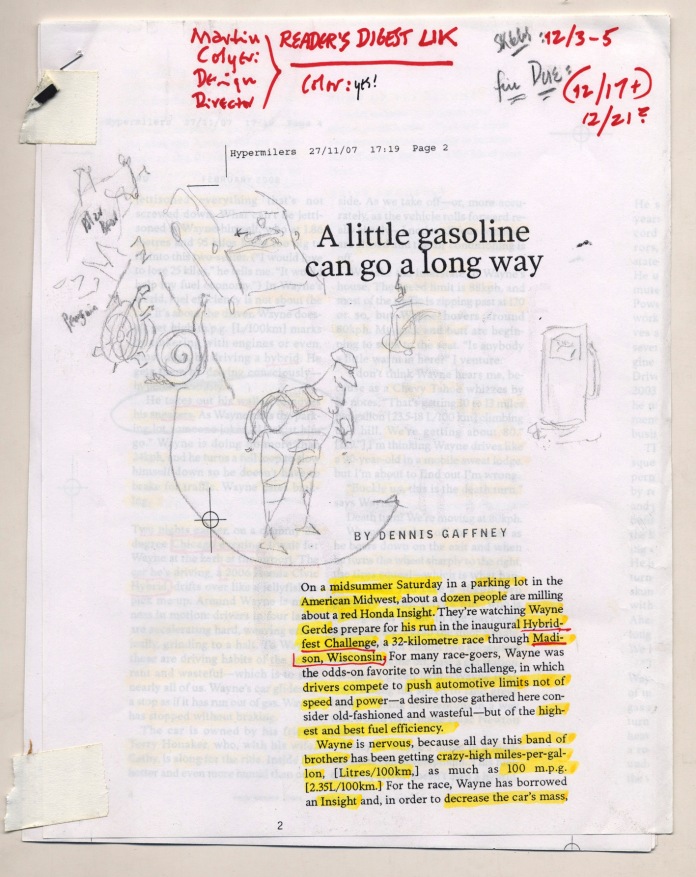 *If you know anything about Twen, you’ll realise this would have involved Simon Esterson standing naked.